Samantha Clark over at the Santa Cruz Sentinel has posted an article discussing the FAA visit and meeting this Friday, also raising the excellent question as to why the meeting is not open to the press or the public. We will do our best to keep you posted on the results.

The article also includes information on the jet-noise survey by Sam Farr’s office.

You can read more here:

Noise is related to speed

We all know that aircraft noise is a function of speed, and that a measure of noise must account for speed and the associated thrust. It sounds simple, but this kind of calculation can be complex. The function has to take into account many variables, such as engine thrust, number of engines, drag on elements of the aircraft, gravity, descent angle, and among them: speed. There are over 100 equations used by the FAA models to calculate noise impacts. These equations are documented in a manual that’s nearly 200 pages long. Many of them used speed. And you know what? Their measure of speed is not accurate.

According to the FAA’s own documentation in the Integrated Noise Model – Technical Manual, speed is not measured or modeled accurately. The speed of the airplanes is modeled at 160 knots even though the planes routinely fly over Santa Cruz at below 10,000 feet and faster than 250 knots. In some cases, the planes fly nearly double the modeled speed. But, according to the FAA: “Reference Speed. The noise-exposure reference speed in INM is 160 knots. Thus, LAE and LEPN
values in the NPD database are referenced to 160 knots.” (INM-TM, p.11). How do you find no impact? How do you model plane noise in such a way that it doesn’t have an impact? Well, one way is to just say the planes are flying slower than they actually are, because speed and noise are related. And in the INM, speed is 160 knots, independent of how fast and loud the planes may be in the real world.

You can read more at: FAA INM TM. 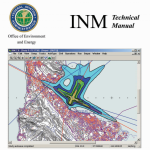 And we’ll keep reading this document and explicating it, to help us all understand how the FAA defined a model, paid a contractor to implement that model in software, and then uses that model to justify an impact without oversight and no checks on their power.

What You Can Do

- Don't hesitate to file a complaint when the Jet-Noise bothers you or your family. Make a note of the event and report it.

- Join our effort! We will keep you posted. Enter your information for our newsletter below! We are matching your skills for a better response.

- Contribute to the cause by volunteering your time. Let's work united for a better tomorrow! Please let us know what you can do.